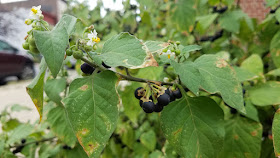 Black nightshade
[Published in 2016, and updated 5 October 2021]
You won't learn the last word here on black nightshade because the word is evolving, and I am not a botanist. But:
Late, late summer, and the black nightshade is ripe, on cue. I tasted these and they had a good, sweetly earthy flavor. It can vary. Some are quite bland.

Noooooo. Deadly nightshade is another plant. And it looks different.
The problem with common names versus botanical - or scientific - names is that occasionally you run into real confusion. So people hear "nightshade" and freak out. But the same people happily wolf potatoes and tomatoes and peppers and eggplant. All nightshades. Also, the Web is rife with misinformation on the differences between the two plants. Read carefully.
Our black nightshade friend, pictured above and below, is Solanum nigrum - or, as it turns out, several different species of Solanum. Eastern black nightshade is Solanum emulans. All black nightshades are edible.
Deadly nightshade is Atropa belladonna. You don't want to eat it.
A fear of and prejudice against black nightshade as a food persists where people are not familiar with how plants are classified or with plant identification in general. Most people suffer from plant blindness. And that's to be expected. Fortunately, it's curable.
But both black and deadly nightshades belong to the tricky family Solanaceae. As mentioned, other edible members of the nightshade family include potatoes, tomatoes, eggplant and chiles. (When they first encountered them, Europeans were afraid of tomatoes. Green potatoes are toxic. But we don't tremble when we walk down the fresh produce aisle. Death and deliciousness are in the details.)
In South Africa I grew up snacking on black nightshade, and there, and in other parts of the world, the cooked greens are eaten, too. Black nightshade is edible, and not to be feared.
Read on to learn to identify edible black nightshade versus toxic deadly nightshade. Luckily, the differences are quite obvious, once you start paying attention. 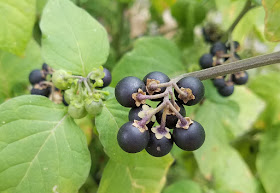 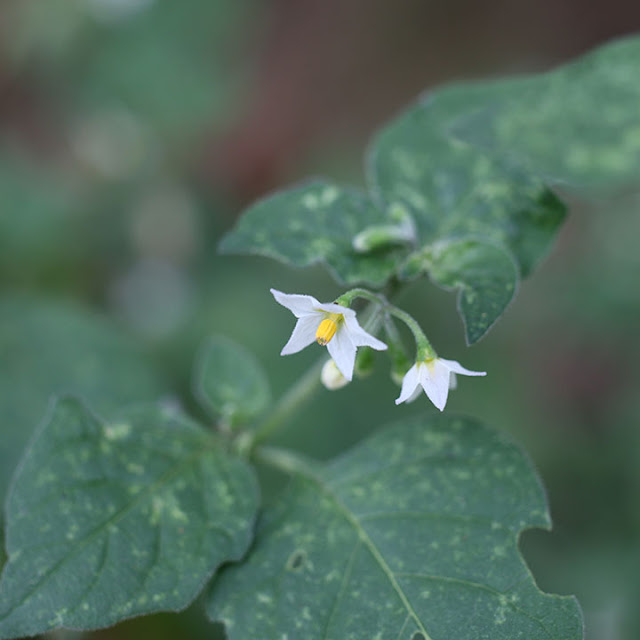 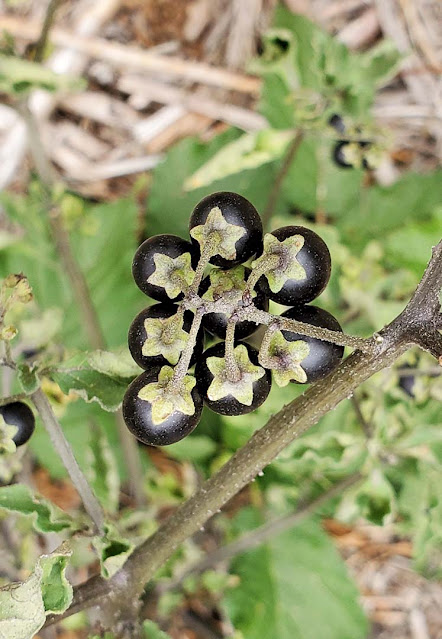 Black nightshade
The ripe black fruits of black nightshade range in flavor from insipid to delicious (like a sweetish tomato with dark undertones).
The green, unripe fruit of black nightshade are considered toxic, so avoid those (the same way you would avoid a green potato). As Ben-Erik van Wyk writes in his encyclopedic Food Plants of the World, "Care should be taken to only pick ripe berries, because the unripe (green) fruits may contain toxic levels of alkaloids (6 - 8 berries may kill a child)."
Note that uses he word "may" twice.
He goes on to write that "the dark purple to black berries are delicious to eat raw and make excellent jams. The juicy pulp may be used for pie fillings, jellies, and drinks. Young leaves are commonly used as pot-herb in rural parts of Africa and Asia." 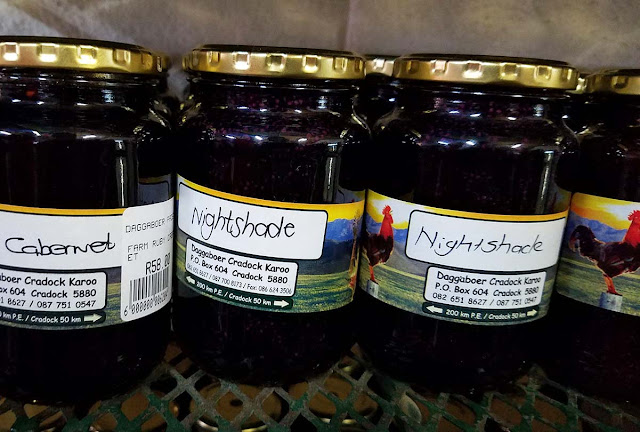 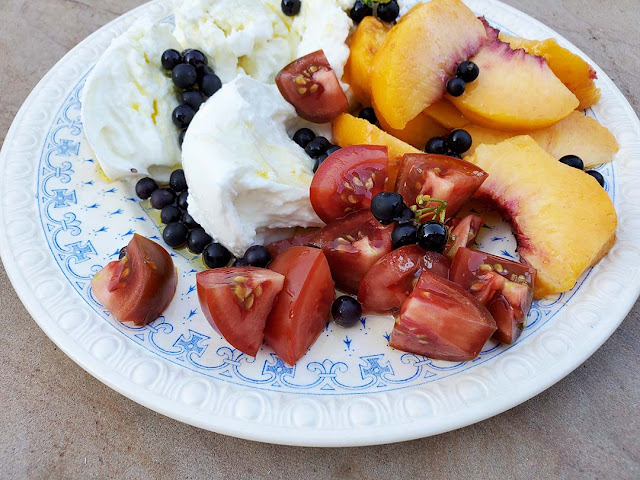 Black nightshade with its tomato cousins, peaches, and burrata
I like more savory applications. A fermented black nightshade ketchup lasts indefinitely in the fridge, and I deploy the raw fruits in luscious salads. 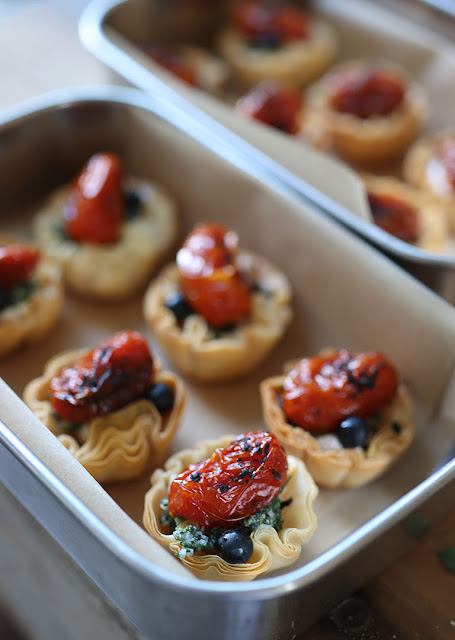 Tomato and mugwort confit with sheep cheese, lambs quarter and black nightshade
And as beautiful garnishes for seasonal tartlets I carry on forage picnics.
In the US, garden huckleberry is the user-friendly and exceedingly confusing common name given to a black nightshade variety (Solanum nigrum var. melanocerasum) that is cultivated as a garden crop. Huckleberries belong to the genus Vaccinium, like blueberries, and this name is all about marketing, rather than botanical accuracy. Its fruits are somewhat larger than the feral versions of black nightshade. You can buy it online at Baker Creek and elsewhere. I was introduced to it by the lovely folks at Tyrant Farms, who sent me a package years ago.
But even seed sources muddy the identification Internet waters by saying inane things like, "Caution should be advised not to confuse the fruits with those of nighshade [sic] (a very close relative), as nightshade fruits are highly poisonous."
Um... It is a nightshade. They're all nightshades. 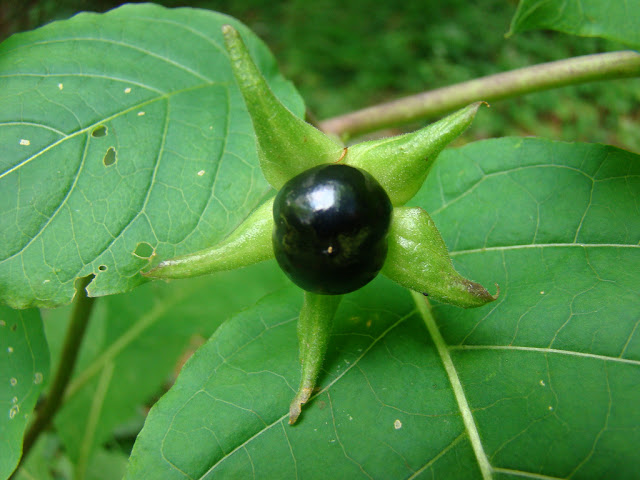 Deadly nightshade. Photo: Stefancek
Let's move on:
What about deadly nightshade identification? Atropa belladonna fruit is borne singly, never in clusters. Deadly nightshade fruit is glossy. (Even though a reputable source like Illinois Wildflowers flips this distinction, and incorrectly states the opposite! Head explodes.)
The green calyces of deadly nightshade are very prominent, more Elizabethan ruffle than collar, extending beyond the fruit. 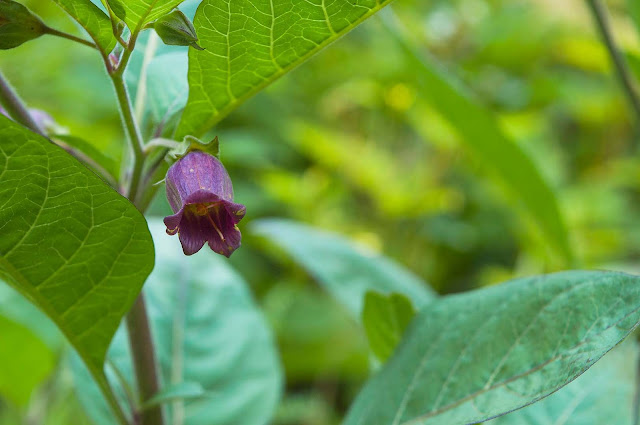 Deadly nightshade flower by Bojana Matic
The flowers of deadly nightshade are tubular and bell-shaped, and range from purple to lilac, with green. They are distinctly ornamental, versus the hard-to-spot tiny white flowers of black nightshade.
Incidentally, deadly nightshade is not very widespread in the US - it occurs mostly on the West Coast, but that will inevitably change (since first publishing this post it has crept to the East Coast).