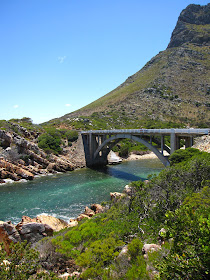 It had been years since I'd traveled along the eastern arm that cradles the deep blue of False Bay in a mountainous embrace. The western side is the familiar stomping ground of Kalk Bay, Foxy and Boulders Beaches and Cape Point. To start in the east you must brave the boring half hour drive to Somerset West, the bleak architecture of Strand and then at last curve up the slope past the popping turquoise of Gordon's Bay.

The road is beautiful and windy, with the bay an expanse of deep blue to the right, with mountains on the left. We pulled over at the viewpoints - always situated on a blind curve to keep you awake - and watched the watery white horses in the wind, sometimes coming into a cove that was protected and calm, then feeling the bite of the southeaster on the car again as we turned back into it. 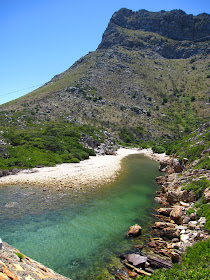 The Steenbras River mouth, above, is a British Columbian blue and green, and we bundu-bashed on foot over hot rock and coastal shrubs to get closer.

Then we came upon this long beach, complete with solitary surfer, and shark that Vince spied from the road. 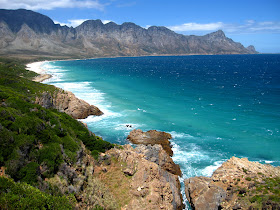 We were heading for Pringle Bay, and spent long enough to take more pictures of the bright water, to eat a boerewors roll and toasted sandwich with Castles, and then moved on to Betty's Bay, where we were surprised to see a sign for penguins. 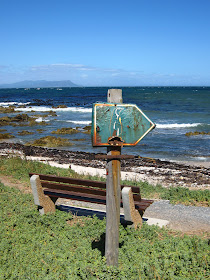 By now we were beyond False Bay, but these penguins have friends near Cape Point, in a bouldery bay that is more protected than this one. 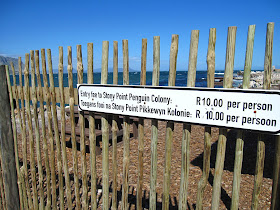 Our new, all cluster Wild Card didn't help us with the entry fee (R10 = about $1.40) but we enjoyed watching the birds and the dassies that live with them, which eat the unbelievably thorny and unpleasant-looking shrubs that creep close to the water. Dassies seem to have lots of fleas. Scratch scratch scratch.

The wind howled here too, and it was quite chilly despite the hot sun. This site is remarkably fragrant with accumulated penguin and cormorant guano. 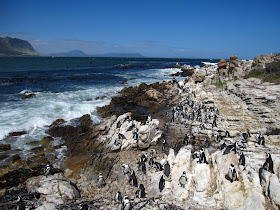 The birds are used to non-threatening humans and completely unafraid. 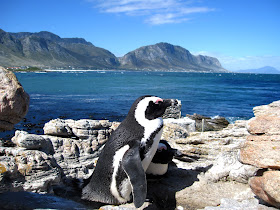 We drove home the long way, cutting into the interior at Kleinmond, and driving up to Sir Lowry's Pass through the orchards of Grabouw and Elgin. One last stop at the top, where we could barely stand straight in the wind, and we headed down, me gripping the dancing steering wheel for all it was worth. After that it was traffic all the way. 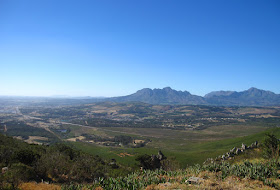 We are planning our side trip - we are thinking of starting in the Karoo, then heading for the mountain kingdom of Lesotho, then the eastern Free State, back to Lesotho and into KwaZulu -Natal over the Sani Pass - the highest and apparently scariest pass in southern Africa - and into the Drakensberg. It's pretty diverse, and I'm hoping for new flowers. I haven't been to the Free State or Drakensberg since I was little, and both have summer-flowering geophytes.

I need a Book.

This weekend I'm looking forward to hiking in the Lemoenkloof with Marijke and a friend who has a permit for research purposes: it is closed to the public, even though it is behind Table Mountain and apparently accessible. Can't wait to see what we find.
Marie at 11:29:00 AM
Share