Are May apples edible? 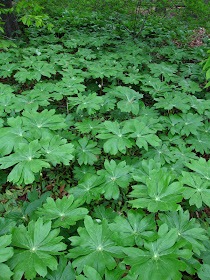 The continuation of my Cautionary Tale [a version of which appears in Edible Manhattan's Summer Issue 2011]:

I can't remember where I first read about May apples. Perhaps on a website, now forgotten, perhaps in Euell Gibbons' Stalking the Wild Asparagus, which was my introduction to wild food gathering, usually known as foraging.

Podophyllum peltatum, May apple, is also called American mandrake. Mandrake - the stuff of magic and legend and dark, stormy nights.

I had kept close watch on a stand of May apples since early in the year year. I waited, and waited, and waited. I was going to eat May apples. I knew that they had to be overripe, not green, or they would still be toxic. I knew that the roots are toxic. So are the leaves of rhubarb, so are green potatoes, so are wilting Amelanchier leaves - we are surrounded by death in plant form. 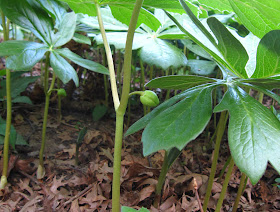 A May apple bud on April 15th. The season was early. 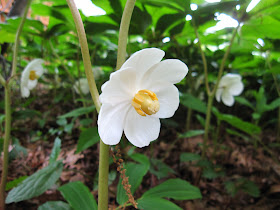 On April 27th the same buds were now flowers, picture-perfect. April apples. Usually only one per two leaves. Fewer if there is little sun. 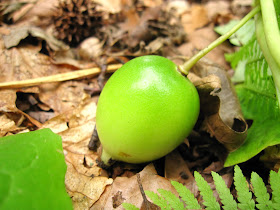 On June 24th the fruits were round, green and impenetrably hard. 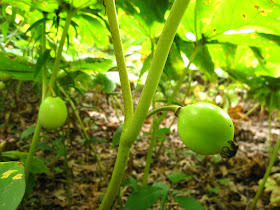 Above, these are fruits grown from the flowers pictured above. The life of the May apple is a sea green one. 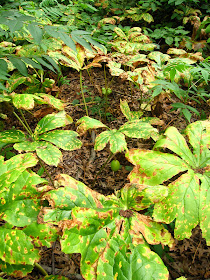 By the end of June the May apple foliage was beginning to be spotty and the leaves were thinking about collapsing, all good signs. Summer dormancy was almost upon them when the green fruit would lie on the ground, still attached to the umbilical stem, and ripen. If animals didn't eat them, first. 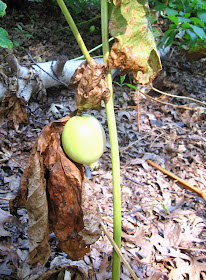 9 July, and a promising yellow had overtaken the pale green. But the fruit was still solidly hard. I waited.

At last the day came when I spied some fruit on the leaf litter, whose mottled edges promised the degree of ripeness I'd been waiting for. I picked two, put them in my bag, and forgot about them for a week.  Then one night while Vincent was at work I rooted in my bag for my notebook, and smelled a heavenly, tropical scent. The time had come. The Frenchie does not approve of my promiscuous grazing habits, so I chose the route of non confrontation. Eat it while he's gone. 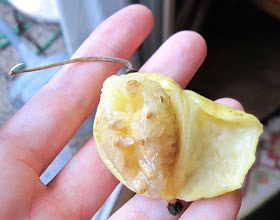 It smelled of my favorite passion fruit, and a little like pineapple. The peel came off easily, the aroma increased. My mouth watered. For a split second I considered the seeds, pondering the wisdom of swallowing them, but reasoned that they would just go straight through me. I don't crunch seeds, and so there was no danger of releasing anything unwanted. Anyway, the jelly-like pulp and the seeds were inseparable, and Mr Brill's book had simply advised, 'Enjoy when ripe.'

So I did, two bites and a brief mulling over the tongue and down it all went. It was delicious. Sweet, slightly astringent, and flavored more like sweet pineapple with guava than the passion fruit. Yum.

After warning of the root's toxicity, Euell Gibbon writes: 'The flavor of May apple, while agreeable to most people, is not easily described. When I eat a thoroughly ripe May apple, I am reminded of several tropical fruits, the guava, the passion fruit and the soursop, but I can't honestly say that it tastes like any of them.'

Etc. etc. etc. Clearly, he had eaten them.

Mr Brill - Warnings about root and raw fruit, then, 'Peel the tough skin and enjoy it raw or cooked.'

I could still taste the fruit in my mouth, but I started to think. Seeds. Nobody mentions seeds. So I went to the Web. I didn't find anything good. Seeds are toxic, poisonous, rumored to be deadly. I emailed Ellen, a foraging friend, and I called Mr Brill. Who told me to call a doctor: 'No one eats the seeds.'

In my Inbox the Ellen told me: The seeds are supposed to be poisonous.  Don't know how serious this is, probably better that you didn't chew.  I'll start checking my references.  Don't freak out.

It was now or never.

I have a great respect for bulimics. Those who love to eat but loathe their bodies more, and who discipline themselves to lose it all, daily. What a terrible life.What focus.

I checked my Inbox one last time: X doesn't know how toxic and neither do I.  I've emailed Sam Thayer but he's not a constant online presence, so I may not get an answer right away. I think it may be quantity related and if you only swallowed a few, you'll be ok.  It's definitely NOT like Amanita muscaria where you feel fine and then die.  You may have a little stomach upset or nothing at all.


The May apple was much more pleasant going down than coming up but I bear it no ill will. Mr Brill's words on the phone were still ringing in my ears. And I could not imagine the Frenchie's wrath and pain if he'd found me in foetal position after eating Another Strange Thing.

So there it is, my cautionary tale. Trust no one. Research backwards.

I think of that May apple with nothing less than affection, and I would like  to try again. I would also like authors to know their subject thoroughly and to eb very careful about what they commit to print. And the Web - it is a morass of misnofation and some very god stuff.  Don't give me 'apparently toxic.' 'Rumoured to be toxic.' 'Possibly toxic.' Commit!

They are delicious, tropical things. And now they stay down.
Marie at 12:58:00 PM
Share